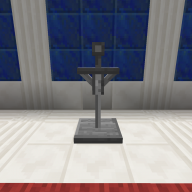 This block holds a full set of armor and can be used with or without a GUI. The armor stand is designed to hold any type of armor from vanilla to mods of all types.

The player can add armor to the stand by holding the piece of armor in their hand and aiming at the desired slot to place the armor, ex, aim at the top to add a helmet. The player can also add/remove/swap armor to and from the stand to and from the players armor inventory by sneak right-clicking on the armor stand on the desired piece of armor/empty slot to add/remove/swap armor to and from the stand. ex, if I am wearing nothing and the armor stand has chest armor, if I aim at the chest piece and sneak-click, I will be wearing the armor. I can sneak click again to take the armor off and place it back on the stand. If I am wearing armor and the stand has armor, shift-clicking will swap those 2 pieces of armor.

If a redstone signal is applied to the stand, sneak clicking on the armor stand will swap your entire set of armor. What you are wearing now will be on the stand and what was on the stand will be equipped on your player.

For version 2.x.x and forward supporting Minecraft 1.8.9 and newer:

*Armor stand is now a wooden block that comes in 7 base styles including a framed armor stand that can be used on the Furniture Paneler.
v1.9.2